Raccoon Control: Tips to Get Rid of Them (And Why You Should Do It!)

Home/Raccoon Removal/Raccoon Control: Tips to Get Rid of Them (And Why You Should Do It!)
Previous Next

Raccoon Control: Tips to Get Rid of Them (And Why You Should Do It!) 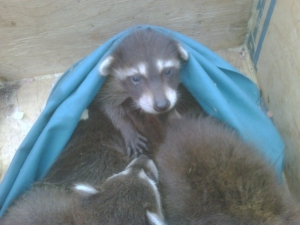 Raccoons aren’t the cute, furry, friendly creatures that the cartoons portray. They are, in fact, a pest throughout Burlington and Oakville – and officially classified as such by the Canadian government. If in your home, you’ll want to get rid of raccoons fast!

For starters, they tend to invade people’s homes any way that they can – via attics, chimney stacks, roofs, basements and even through screen doors. (What nerve, to basically just waltz right in through the door!)

Meanwhile they’re just as bad as rodents when it comes to scavenging through trash cans, stealing food (especially pet food that’s been left out), as well as scaring and being a nuisance to domestic animals. The final strike against them is that they can be infested with disease.

Raccoons often have worms, fleas and other illnesses that can be given to domestic pets.

Raccoons may even have rabies, however they’re not born with it and there is only a short period of transition when they can infect other animals via saliva.

There are several popular ways to get rid of raccoons if you have a problem with them, but consulting with or hiring a local expert is always a good idea before tackling them on your own.

Familiarize yourself with raccoon behaviour

In general, raccoons are only interested in a few things in life. They want to forage and find food, and shelter. But they are confident animals and aren’t scared of domestic pets or even humans and will do whatever it takes to get hold of some enticing morsels. Most of their activity happens at night since raccoons are nocturnal – they’re a mischievous and cheeky species!

Today raccoons are more common in urban areas than they are in rural areas, mainly because food and shelter is more readily available for them in towns and cities. Raccoons might look friendly but they’re not domesticated, can weigh more than 20kgs and are extremely strong.

Get rid of raccoons by trapping them

Trapping for raccoon removal sounds like the most humane way of capturing and relocating the animals, but be aware that you could end up trapping another animal like a cat or possum. Also, if a raccoon (or other animal) is trapped it should be immediately released within the same proximity of your home. Immediately because it would be inhumane to keep it trapped.

Further there are legal requirements for wild animal traps. They have to be the right size and made of sturdy material. Out of all animals raccoons are the craftiest and will get out of anything they can.

It’s of the utmost importance to make sure the safety and welfare of the animal is first and foremost in any animal removal process. The aim has to be to relocate the raccoon locally (see local regulations) yet animal proofing your property is the best prevention and most humane approach.

Note that in many places it is illegal to trap and relocate raccoons unless you are licensed. To avoid the risk of getting fined, hire a qualified wildlife removal company able to capture them in the most appropriate way.

If your raccoons are in the attic there may be a young family nested there. It’s important to keep the family together, otherwise you’ll have a crazy group of young raccoons running around and even dying if you capture their mother.

Of course prevention is always the best policy. If you don’t have the problem in the first place you’ll have nothing to worry about. Simple things such as securing your trash cans, not leaving pet food out, locking dog and cat flaps, closing and locking windows, and sealing your roof access as well as underneath your house.

Having said all of that, raccoons are talented and have adapted amazingly well to survive in the modern era. They are seen as a pest because they are so clever and sneaky, and can cause a lot of damage in the process of getting what they want! But don’t let their sneaky ways get the best of you – if you’ve had the misfortune of having one (or more) of these wily creatures invade your property, you can get rid of them.

If you need help getting rid of raccoons, call us at Regional Wildlife Services now!